When you come in last in the Tour de France.

Prufrock at the American Conservative directed me to this book review in the Times Literary Supplement this morning. Max Leonard’s Lanterne Rouge is about famous last place finishers of the Tour.

“Finishing something as difficult – and dangerous – as the Tour is one of the hardest things to do in sport. Leonard gained a small insight himself into the hardships when, as a decent amateur cyclist, he tried and failed to finish a single stage in an annual specially organized event for amateurs.”

“Leonard traces the lanterne rouge [the red lamp at the end of a train] to its origins. Although the man who finished last in the very first Tour in 1903, Arsène Millochau, wasn’t given the nickname, he is deservedly rehabilitated here, as the quintessential cycling tough guy. Millochau finished so far behind his rivals in the inaugural Tour that his results appeared in newspaper editions a day after theirs. Others gave up, but Millochau kept going. Eventually, he was almost sixty-five hours behind the winner, Maurice Garin (who decided to make things a little easier the following year by sneaking onto a train). When Millochau was tracked down in 1947 by a French sporting paper, he certainly didn’t sound like someone who saw the last place finish as a humiliation. “Le Tour d’aujourd’hui? Une simple randonnée” (“a walk in the park”, as Leonard translates it), he remarked. Considering that Millochau’s ungeared bike weighed about five times more than those of today’s competitors, that he had no team to rely on, had to complete all repairs by himself, and that stages of that first Tour lasted through the night, you can see his point.”

I used to work near the airport and I rode my fixed gear everyday from Coxwell and Sammon, about 26kms one way. It was a steady uphill climb that took me about an hour to complete, longer in winter.  I’m planning a trip to Niagara-on-the-Lake with my sons – we’re riding our fixed gears from Toronto, a trip of about 140kms which should take us about 5 hours. I can’t imagine doing the Tour – a three-week, 3,664-kilometre odyssey – on a fixed gear bike! This year’s winner – Vincenzo Nibali – completed the race in just under 90 hours. Nibali rode a multi-speed, carbon-fibre Specialized S-Works Tarmac. 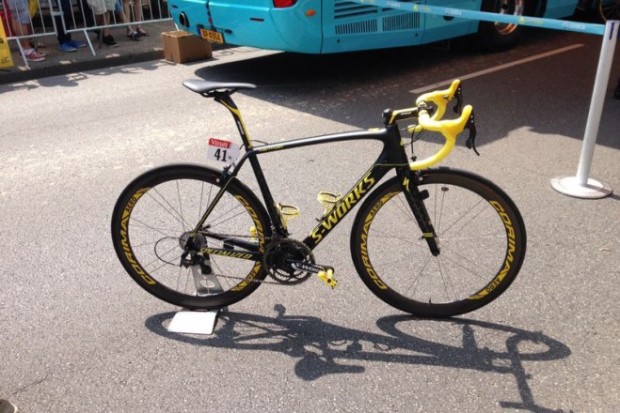 Update: Ji Cheng of China claimed the lanterne rouge at this year’s Tour. He finished a respectable six hours behind Nibali.

Big ones. Small ones. Some as big as your head.

For Fixie Junkies only

A Clerk of Oxford

Check your prejudice and just ride

It's all about the bike.

Spontaneous thoughts on a humble creed